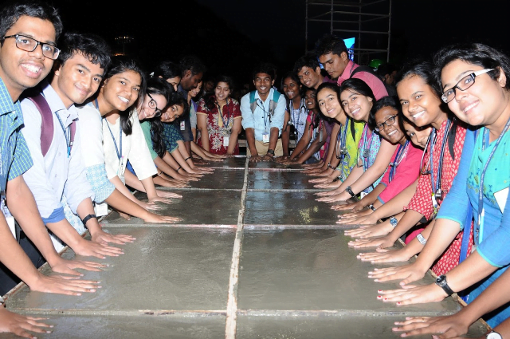 Kannigapuram was an unfamiliar name of a village in Vellore till ten years ago. Today it is the venue of the new CMC hospital under construction. Sometime in 2005, the then administration led by Director Dr George Chandy felt the need of a new campus to cater to the rapidly growing number of patients. The mother campus at Thottapalayam which was built between 1927 and 1932 was not enough for the burgeoning patient load that was building up year after year.

With limited resources but with prayerful vision, about 80 acres of land was sighted and bought in Kannigapuram. The challenges were many, ranging from finances, approvals, master plan and capacity to build.

Ten years later, the dream is becoming a reality. The planning that commenced in 2013 to build a 1500-bed campus has culminated in the commencement of a multi-speciality hospital and teaching facility, with the ground breaking ceremony on the 20th of December 2016, followed by a bricklaying ceremony exactly one month later .

The original 80 acres has been added with another 10 acres of land allowing scope for an additional residential campus to be conceived. Presently, both the hospital and residential campuses are in formation at different stages. When fully built, CMC will have extra residences of different grades, a self sufficient campus with amenities including a primary school. Other facilities planned include a low-cost residential facility for relatives of patients.

The services that will move into the Kannigapuram Campus include those disciplines that attract larger number of patients from outside Vellore. Diverting them to a new location will release vital space in the town campus to the citizens of Vellore for basic specialities. Neurosciences, Cardio Pulmonary Sciences, Integrated Cancer Care, Renal Sciences, Haematology and a multilevel intensive care are planned to move in the first phase of development.

In addition, CMC is foraying into the new area of Trauma Care with a Level 1 integrated care for trauma patients, especially road traffic accident victims. The only other two Level 1 centres in the entire country are in the government sector, in North India.

Trauma is now the leading cause of death and disability in India, and Tamil Nadu is the State with the highest number of road traffic accidents. According to the national trauma statistics of 2016, the Mumbai-Chennai Highway running through Tamil Nadu is the fourth deadliest highway in the country. The new CMC trauma centre is strategically placed, exactly on this highway, to cater to the needs of the largest numbers possible. CMC Vellore, in keeping with our founder’s philosophy of responding to community needs, considers trauma to be a public health issue and is responding appropriately by starting the first trauma centre in the State.

Some of the features planned for the Centre include 24-hour on-site coverage by dedicated Trauma Teams; a 128-slice Full Body CT Scanner capable of producing high-definition images within a minute; a separate Cardiac Care Unit; and over 30 operating theatres including six in the Trauma Centre.

The treatment strategies followed at the centre will be based on the best practices currently followed in the United States, the world leader in trauma management. Rehabilitation and follow-up of patients who have received care at the centre will also be looked at, especially as the majority of victims fall in the age group of 25 to 34 and are the breadwinners of their families.

Apart from this, awareness programs for schools, colleges and officers of the local transport authorities, will be conducted by the trauma teams. CMC will also work with the other centres, and associations as well as with the government to put in place a standard curriculum for Emergency Medical Technicians (EMT).
In keeping with CMC’s philosophy of environmentally sustainable growth, the new campus will replicate a number of green initiatives that are already in place in our current campus. These include biomedical and solid waste management systems, solar panels for generating electricity, cooling towers to replace furnace oil for air conditioning, and so on.

Since Vellore has been facing acute water shortage for the past many years, special care has also been taken to conserve water through measures like rain water harvesting and recycling of water for use in the laundry unit. The campus will have the facility to treat nine lakh litres of sewage water for reuse in gardens and toilets. Dedicated spaces for greenery known as Open Space Reservations, that will serve as the lungs of the campus, have also been planned.

And as with all our other campuses, centrality of the chapel has been ensured in the creation of a smaller chapel in the front and a larger one in the rear. This is not just symbolic but also in keeping with CMC’s belief that healing of our mind, body and soul needs God’s blessings. The chapel becomes a sanctuary of hope, peace and comfort for the care given and the care givers.

The Christian Medical College, Vellore - Chittoor Campus seeks to be a witness to the healing ministry of Christ, through excellence in education, service and research.

Write Your Feedback to Us..!